Pay What You Want

Hosted by The Song House with Joanie Bones

Join us this April for an online gathering led by singer Joanie Bones. The Song House invites you to gather in the spirit of sharing a yarn, a song or whatever you’d like to bring along. You are welcome also to join us as an observer.

We will also be delighted to share the third and final part of our Poetry Video Series. The theme this time is ‘Connecting with the figure of Colmcille/Columba’. The poems in these short videos were composed by attendees of our Colmcille poetry writing workshops held in the autumn. These three workshops were facilitated by Irish poet Annemarie Ni Churreain and Scottish poet Charlie Gracie and were supported by the Colmcille 1500 grant scheme marking his 1500 birth year anniversary.

St Colmcille, also known as Columba is a very rich and significant historical figure who during the workshops Annemarie described as ‘being at the intersection between pagan and Christian Ireland’. Anecdotally, Colmcille has been described by others as ‘the last Druid’ and this perhaps flooded his known and documented poetic appreciation and love for the beauty of landscape, the natural world and in particular, his beloved Ireland. 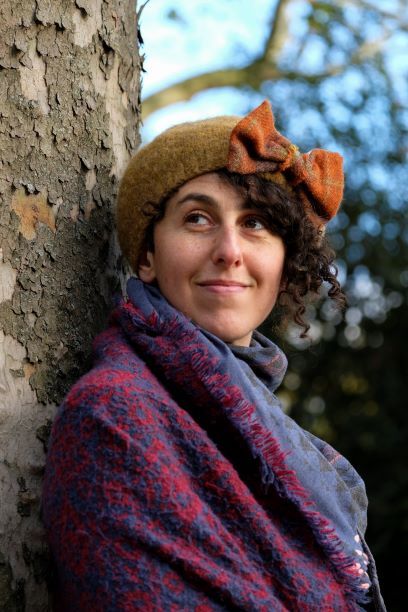 With a background spanning a deep love of folk song of the British Isles, teenage years spent immersed in 90s Britpop London, decades of spiritual searching, a deep love for devotional music from the East and her daily life as a Persian/Jewish Londoner living in the remote Scottish Highlands, Joanie Bones gathers the fragments of cultures, lands and songs into a music of soul, spirit and connection.

Mentored by four-time winner of the Scots Singer of the Year Award Siobhan Miller, Joanie is committed to using song as a power for exploring meaning and creating unity. She has sung everywhere – at births, on boats, at festivals, at folk clubs, sit-ins, lock-ins and die-ins – always encouraging people to join their voices together in song and clearing the way with her deep, resonant voice, reminiscent of June Tabor.