Walking in Donegal with Seamus Doohan

Over the next few months we are going to write a series of blogs describing the wealth of culture, history and things to do in this area of Donegal. We’re starting with Walking Donegal with Seamus Doohan

Seamus Doohan has lived in this area all his life and has become passionately interested in the history, archaeology and landscape of this particular area of Donegal. As he introduces himself:

My name is Seamus Doohan. I was born and raised in the Gaeltacht area of Falcarragh in Co. Donegal, under the shadow of the majestic Derryveagh mountains, and within a whisper of the rugged coastline of the wild north Atlantic.

As someone who has a passion for the outdoors, it was inevitable that I would take to hill walking.  From an early age, I have spent many enjoyable days roaming and exploring the hills, mountains and coastline of the region and have gone on to become an experienced hillwalking guide. I have built up an intimate knowledge of the landscape and can choose from a host of enticing and exceptional routes.

In addition to his hill walking expertise, what makes him an exceptional guide is his intimate knowledge of the culture and history of this area. He took a group from a Singing on the Wild Side week at Easter, on a walk up Beltaine near Gortahork, only 3 miles from the Song House. We had a fascinating trip, which ranged from stopping on the roadside to taste whin flowers (aka gorse) which were extensively used in times gone by, to hearing the adventurous story behind an enormous whale skull and bone arching over the entrance gate to a large house. But then we looked further- he pointed out the rounded old stone wall that circulated the property- could this be the remains of a ‘cashel’ an ancient hill fort that used to be in the area?

I said that I was particularly interested in megalithic sites. On the way home, we took a minor detour, and found ourselves in the back garden of an unassuming bungalow. What was in the back yard?- an enormous dolmen. It must have measured at least 12 feet in length. The sort that in Cornwall would have a tourist sign leading to it, and a well worn path of visitors. 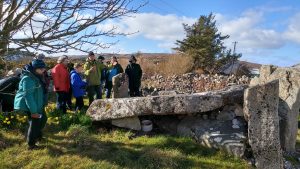 Seamus and I plan to organize some short breaks here at The Song House next year, where you can combine a cosy stay at the Song House, with fascinating walks and hikes during the day. 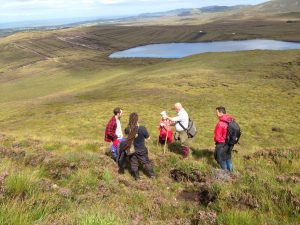